Glen Holme Stud (AJK 184) is owned and operated by multiple generations of the Kelly family at Manoora, SA. This has been the case since their first Merino stud was registered in 1946. Allen and Joy Kelly set up the Dohne Merino stud in 2006 and now their daughter Lauren and her husband Damien are involved with the running of the business. Their children are also interested and helpful.

Allen’s background to becoming stud master began in the 1970’s and included some years gaining external experience in the field.

Glen Holme is a diverse property with other major enterprises including mixed grain production and livestock. The climate is Mediterranean with an average annual rainfall of approximately 485mm, largely throughout cold winters. The property is very picturesque with rolling hills, some steep grazing slopes and some flats more suitable to cropping and pasture rotations. 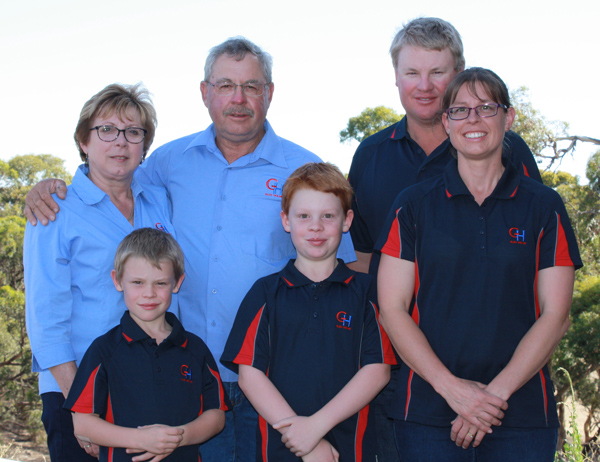 Each of the main participants in the Glen Holme business brings a set of skills and experiences to the mix. They are complementary and give rise to a wide suite of strengths and experiences.

Allen Kelly is the third generation of his family at Glen Holme; his grandfather established the business in 1904. A Merino Stud was established in 1946, and a Poll Merino flock added in 1954. Dohne Merinos were added in 2006. Allen had an early interest in Beef Cattle, buying Murray Greys in his first year after finishing high school. He later trained with the then WB Ashby and Sons empire as a Jackeroo specializing with their livestock studs Poll Shorthorn Cattle and Merino Sheep. Whilst with Ashby’s he was stud cattle groom for three Royal Shows, Adelaide twice and Sydney Easter Show. His training was in both meat and wool aspects of livestock production. He twice worked as an assistant judge in the SA Beef Carcass Competitions. This helped his awareness of fat and muscling and the composition of a good carcass.

Joy was brought up on a small farm near Gawler SA and moved to Glen Holme when she married Allen in 1980. Her workplace skills prior to raising four daughters were in the retail sales and customer relations areas. After the last of the children left home for university she returned to formal employment in retail sales. More recently she has had roles in office administration and customer relations for a large machinery dealership. She brings a good ability to evaluate information in breeding concepts and has a great eye for the best type of animal in both sheep and cattle.

Lauren (Philp) is Allen and Joy’s eldest daughter. From the time she was a toddler, approx 18 months old, she has wanted to be involved in farm activities. During her primary school years she made up her mind that she would need to get a university degree and ultimately return to the family business. She has a Bachelor of Agricultural Science, having trained at the Waite and Roseworthy campuses of The University of Adelaide. She worked as an agronomist with Elders for 5 years before leaving to start her family. She trained in animal nutrition, production and breeding, as well as crop and pasture production.

Damien Philp, Lauren’s husband, was brought up on an extensive sheep property on the arid side of Peterborough SA. His family runs about 1400 ewes in a wool growing enterprise. Damien spent quite a number of years of his employment driving large machinery of different types before deciding that he wanted to learn farming in our situation and joined the operation at Glen Holme in 2011. He has adapted to learning the skills required for breeding stud sheep well. His enthusiasm for driving means that he is usually involved if ram delivery is negotiated.