Our belief about involvement in Sire Evaluation Trials led us to participate in the Balmoral Sire Evaluation Merino Lifetime Productivity trial near Harrow in Victoria.
This is a long-term project that is heavily supported by AWI and industry partners, with a $13 million budget for a 10 year program.
The ewe progeny of a Sire will be kept until they are over 5 years old, with their own progeny measured for production.
Our entry is Glen Holme 141077, and we saw the ewe hoggets on February 16th at the Field Day.
Unsurprisingly, these 40 daughters measured as trait leaders (top 10%) for: Weaning weight WWT, Post Weaning weight PWT, Yearling Eye Muscle Depth YEMD, Yearling fat YFAT.
They were visually scored in the top 10% for: Breech Wrinkle BWR, Legs (Structural soundness) LEGS.
Other scored traits were also close to the top.
This pen of 40 ewes was particularly even in type, size and condition, which was pleasing, given that 45% on them were twins.
Unsurprisingly, they were not trait leaders in wool yield and wool quality fields, nor were they the worst. Glen Holme 141077 is after all a Dohne, not a Merino, and the Dohne breed aims to have a balance of production traits expressed. 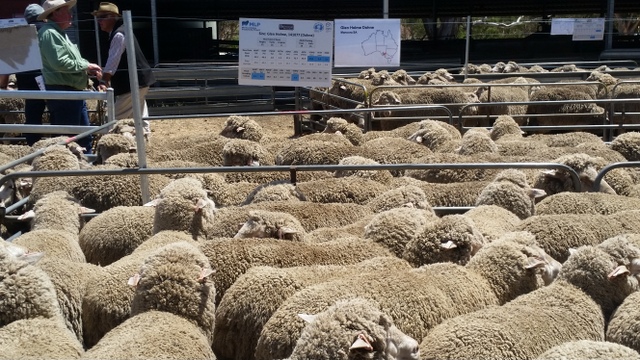